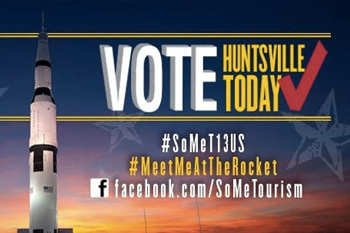 Each year, the Social Media Tourism Symposium location is decided by a vote on Social Media and in 2013 the Huntsville Madison County Convention & Visitors Bureau entered Huntsville into the contest. Ad4! saw this as a perfect opportunity to put our social skills on display and help our community. We first made a little video to promote Huntsville in the quarter final round against Cleveland, Ohio. This video was the basis of our pushes on Facebook and Twitter to promote Huntsville. We pulled out all the stops and had an all out blitz. We engaged the Rocket City Bloggers who helped promote the event and our community. And it worked! Huntsville smoked Cleveland, Ohio and made it to the finals.

The final locations to host the 2013 Social Media Tourism Symposium was Huntsville versus Missoula, Montana. Talk about pulling out all the stops. We invited people from the community to come to our studios and tell the world why they love Huntsville. It was a huge success! It’s easy to get Huntsvillians to tell you why they love it here, like Huntsville Mayor Tommy Battle and Ad4! Founder, Felica Sparks. We had a great time making this video and went on an all out tear to promote the vote on Facebook.

Not only did we make a video and promote it and the event on social media, but we also did live remote broadcasts for local radio station WTKI. At 7:00 AM at the Convention & Visitors Bureau, some of their employees came out to be interviewed and make their pitch to help promote Huntsville.

All our efforts paid off! Huntsville won the finals and was selected to host the 2013 Social Media Tourism Symposium.